GIVEAWAY: Click here to find out more about Friendly Ferret Giveaways and the date of the next one! 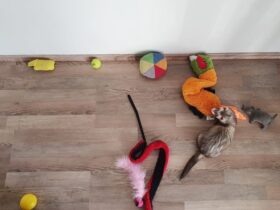 Is possible to have a ferret and a cat or dog?

What about other pets? Can they get along?

Those and many other answers about living with a ferret and other pets you can find in this article. I will talk about ferrets and cats, ferrets and dogs, and ferrets and other small animals like guinea pigs, hedgehogs, rats, and chinchillas. After reading this article you will know whether it is a good or bad idea to expand your family of pets.

Can Ferrets And Other Pets Get Along?

Yes, ferrets are social animals and they love company. Most ferret owners have at least two ferrets so they can play with each other or simply hang around in a pet-friendly household. If you only have one ferret you have to give him lots of attention because ferrets can get bored easily and when a ferret is bored, then troubles happen. 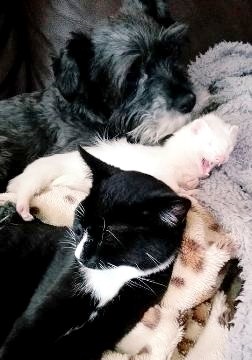 If you can’t get another ferret, you could get another pet, but be careful with the choice. Ferrets mostly get along well with other animals, but you have to keep in mind that a ferret is a predator and it used to hunt animals. Always be careful with interspecies interaction – they “don’t speak the same language” and usually some period of getting used to living together is needed.

On the other hand, the ferret is a small animal, and that means it too can become a prey. It is important to introduce ferrets and other pets properly. But, before you get to that part, make sure you know what pets get along with ferrets.

How To Make An Introduction?

The first and most important thing when introducing ferret with other pets is to do it in a controlled environment. It doesn’t matter whether you are introducing a ferret and cat or ferret and dog, you have to keep them supervised and under control. That means using a leash on both animals, keep them at the safe distance and keep the introduction brief. Do it for a couple of minutes then take a break. 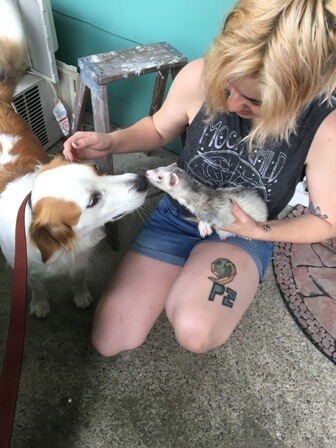 Read their body language so you can see if any animal is stressed, uncomfortable, or even angry. If you can sense it will end in a bad way, abort the process and try again later. Keep in mind that most introductions take time, animals can’t click instantly (especially different species).

Are Ferrets Good With Dogs?

The first combination I want to solve is the ferret and dog combo. Dogs are by far the most popular pets so it is natural that we cover them first.

The bad thing is that the ferret-dog combination can be tricky. Dogs can get along with ferrets, but you have to be careful. There are dangerous situations that can happen with dogs and ferrets.

Two of the things that are very important when you are trying to introduce dogs and ferrets are dog’s breed (some breeds were made for hunting small animals like ferrets) and individual dog’s prey drive. If your dog is chasing other small animals like cats, birds and other wildlife, maybe introducing him to a ferret isn’t the best idea. Also, be very careful with bigger dogs. Even though they don’t intend to attack or injury a ferret, they can make a lot of damage by simply stepping on them. 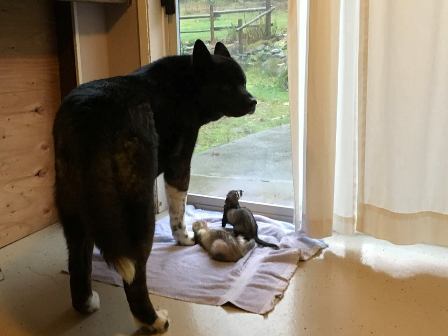 The introduction should be in a controlled situation. It is a good idea to show the dog that ferret is a part of the family. If the dog starts to growl or bark at the ferret stop their introduction and try again the next day.

When you can see that their relationship is getting better, you can relax, but always keep them under control. Also, provide your ferret with a place to hide just to be sure. You have to remember – even if they do get along, never leave them together unsupervised! One bite (it can be unintentional) is enough for serious injury or even death of a ferret.

Those are only a few tips you can do to introduce ferrets to dogs. If you want to learn more, read my post about living with ferrets and dogs.

Are Ferrets Good With Cats?

The ferrets and cats’ situation is much brighter because most ferret-cat combinations are successful. Ferrets and cats get along very well, better than with the dogs.

The introduction between a cat and a ferret doesn’t have to be too strict. But, just like with the dogs, keep them supervised until you can see that they can get along, or just tolerate each other without picking a fight. 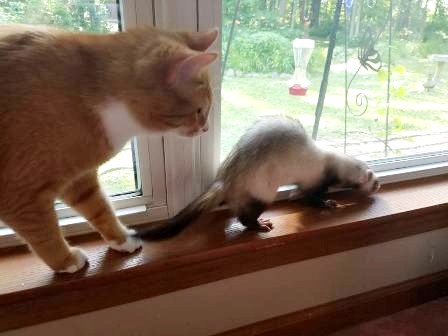 I am sure if the cat doesn’t like the ferret, it can always jump on the furniture and get away from that weird long furry, and smelly ferret. You don’t have to worry about cats eating ferrets, ferrets are too big for that. But, you have to keep them under control to avoid bites, scratches, and other injuries. Also keep in mind, that every bite or scratch from each – a cat or a ferret – can cause serious injury, and a vet visit is in order.

Cats and ferrets might get along, but it is not that ideal to achieve that every time. So, if you want to check out the ferret and cat relationship in detail, read my post about ferrets and cats.

Are Ferrets Good With Birds?

Ferrets and birds aren’t the best combinations for living together. Ferrets have a high prey drive and keeping them around birds will get the bird in danger.

The good thing is that birds can fly off on a safe spot, but once is enough for the bird to fall asleep in the wrong place. It doesn’t matter if you are thinking about a ferret and parrot or a ferret and canary bird, that just won’t work.

I wouldn’t recommend any type of introduction between those two pets. Don’t even hold a ferret and put it close to the bird’s cage. Even that simple action can cause your pet bird a lot of stress.

Most ferrets WILL attack a bird.

Are Ferrets Good With Other Small Animals?

Ferrets and small animals are a big NO-NO in every possible way. Every small animal that acts like prey in the wild is not a good combination with a ferret. Ferrets eat rodents and other small animals like rabbits so they can’t be introduced, let alone live together.

This combination is probably the most dangerous combination. People who feed ferrets with whole prey mostly use mice so they will definitely see them as a snack. Mice are small and adorable, but only to us. Ferrets will hunt them down probably the moment they smell them in the room. Just like with birds, even having a ferret in the same room can cause stress in mice. That is something you want to avoid at all costs.

The situation between ferrets and rats is pretty much identical to the situation with mice. Just like mice, rats are part of a whole prey diet. The good thing about rats is that they are much bigger than mice, but that doesn’t mean ferrets won’t be able to grab them and kill them. Having a ferret and a rat in one room can cause stress to rats so don’t do it. Don’t let them free roam and don’t let them be in the same room even if they are in separated cages.

Rabbits are another “snack” ferret owners use when feeding their ferret’s raw meat diet. Rabbit can be part of a ferret’s menu in a whole prey diet and in raw meat diet so this is also a big NO-NO situation. Rabbits are sensitive and having a ferret in a room can cause them far greater stress than with mice and rats. Yes, there are products for rabbits that are good for ferrets, but that is the only thing that those two animals have in common.

Although ferrets don’t eat chinchillas that don’t mean they can live together. Yes, chinchillas are rather big but that still doesn’t make them a perfect companion for a ferret. Even if the introduction goes perfectly, any small animal can feel the predator in the house and it will be under huge stress.

Hedgehogs are rather unusual animals, just like ferrets and that is probably the only thing those two have in common. Hedgehog is another animal I wouldn’t recommend combining with ferrets. The reasons are pretty much the same as every small animal I mentioned above. The good thing is that hedgehogs have their defense mechanism on their backs so they aren’t completely harmless, but I still wouldn’t recommend any type of coexistence between those two.

I know that this post may seem like your ferret can’t get along with other pets, but that is completely wrong. Your ferret will get along with cats and dogs, just make sure that the introduction period is long enough for your pets to really form a bond. Unfortunately, that is not the same story with small animals like rats, mice, and rabbits. Their best way of life is away from each other, without knowing about each other.

There are many households that have both ferrets and dogs or ferrets and cats or all three – ferrets, cats, and dogs and they are one big happy family. 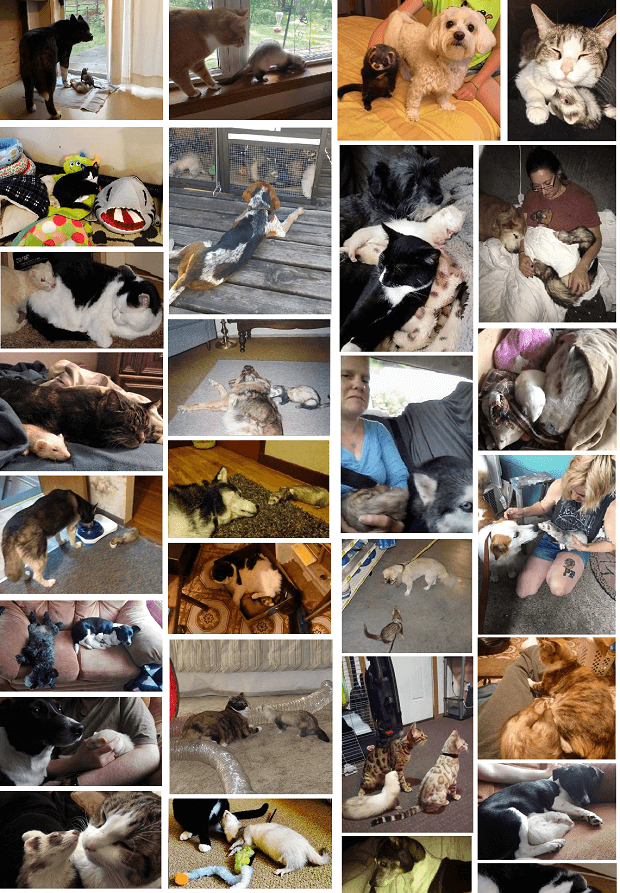 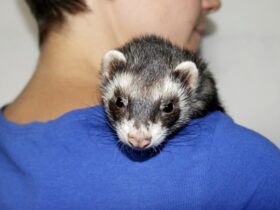 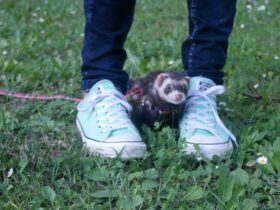 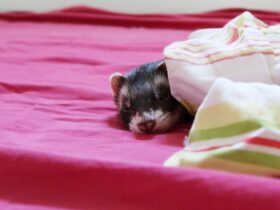 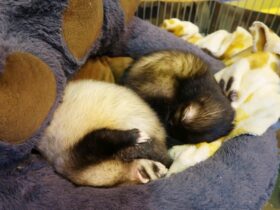 Where Can I Buy A Ferret As Pet? Good And Bad Options Guide 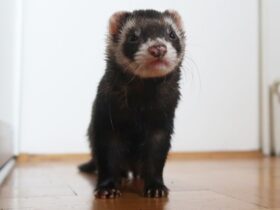 What Does A Ferret Look Like? What Kind of Animal It is?

Ferrets And Cats In Household: Are Ferrets Good With Cats?

Ferret Proofing Your Home:How & Why Should You Do It? 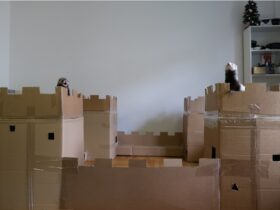 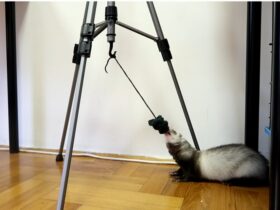 Make your own ferret toys