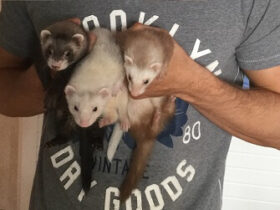 I’m Diana, I live in Belgium with my husband, our two ferrets and our dog. He had Pico and Lory before we met 🙂 they are brother and sister, they love each other and cuddle all the time. Now that they are a bit older, they are a bit less goofy than before, but there is always a way to instigate a good war dance. They come from a ferretry in Limburg, Belgium, but most of their surroundings, the two-level Ferplast cage, and many toys are from the Netherlands where ferrets seem to be more popular. 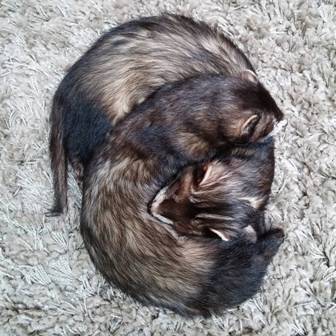 Pico is a lazy, sleepy boy, Lory is an alert, agile little girl. They eat Versele Laga Ferret Complete kibble, and they get cooked meat offered now and then, but Lory is so picky, she always pulls away from her face with a disgusted lip pull :)). Pico eats anything that comes from a human hand.

Each ferret thus their own favorite toys and the best game is to get all the toys out from all the hiding spots, make noises with them (one squeak/rattle is not like the other, they know very well what sounds belongs to whose toy), let the ferrets come to fetch the toys, play a bit of tug of war, let go and watch them stash the toy away.

Another good game is to make it difficult to get to the toy, for example, Lory’s ball with a bell in it fits perfectly inside a kitchen paper towel roll, and it is hilarious to watch Lory push it around trying to get to the ball. One day she will triumph… Pico is a fan of larger soft toys, he loves wrecking them.

My recommendation to someone who gets ferrets is: please do not give three-monthly shots to your female ferret to halt her menstrual cycle. We used to do that with Lory because we did not know better. She would always get so frustrated before the shot, and she would always gain a lot of weight after the shot, then lose it over the next months again. We did not realize how taxing this must be on her body until we moved and changed to a vet who specializes in ferrets, who recommended an implant that regulates her cycle. Since then she is her normal self, not any less active than before, but thankfully no weight fluctuation and no extremely wound up days.

Another recommendation is: if you have ferrets already and also want to get a puppy, consider that you will have less time for the ferrets from the moment you have your dog. Raising a puppy requires a lot of time and attention, and walking him every day will take time away from your day that you had spent with your ferrets until then. Also, the dog and the ferrets may not get along and they may have to be separated. You might find that your ferret wants to dominate the newcomer (this is what Pico tried.. our mellow little Pico bit the puppy’s paw, not too hard but enough to make the puppy scared for a while. He is 1 year old now but still doesn’t fully trust Pico although Pico no longer bothers him). We love all our pets but sometimes I regret that the ferrets get shorter periods of daily attention than before.

Another important point is to keep your ferrets’ home clean at all times (scoop poop daily or every two days maximum, especially important in summer).

Ferrets have a lovely musk, find out if you like it before you get them. If the smell puts you off, then please do not force it. But personally, I’m in love with a warm musky belly.

Dooks from us all