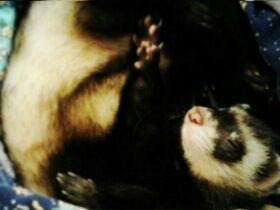 I’m Britt – I’m 25 and live in Chicago IL, USA (in Chicago – not near, around, or close-ish to Chicago which is a big deal to us Chicagoans) with my little carpet shark, Shimbleshanks, and his two feline brothers Pantalaimon and Kahlua Bear. My passion is writing, as I’m working on a high fantasy novel series, but I make a living working in a surgery clinic as a receptionist and am considering going to school to be a vet tech in a year or two. 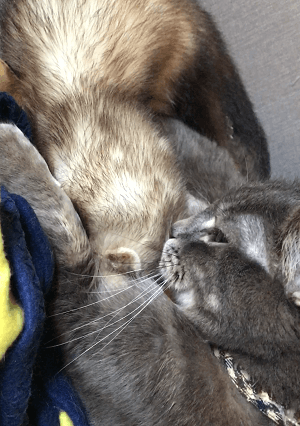 I sort of accidentally adopted Shimmy.

The day I lost my last rat, my mom took me to get cat food from the store – I mentioned to her how sad I was to have lost my last rat, and said I wouldn’t get new ones until I could sustain a large colony of five or six. “I’d love to get a ferret next, but they’re just so expensive!”

We went into the store, and per usual I wandered to the small pet aisle to try and cheer myself up by watching the hamsters be silly. I caught something move out of the side of my eye, and I saw there was a large cage with a bunch of boxes on top of it. I thought it was empty for a moment until I saw a little masked face look at me.

I was startled to see the little ferret in there by himself, and even more startling – he was 75% off. At last according to the sign on the cage. I grabbed a worker, asking why this ferret was by himself when there was a cage full of ferrets just a few feet away.

“Oh, he’s not adoptable. He has a biting problem.” I was confused – this was a pet store, not a shelter, and the sign clearly said he was at a reduced price. The worker clarified that he was merely not likely to get adopted, and they couldn’t recommend adopting him, as he’d been there for nearly a year and they could not get him to stop biting the workers.

So I asked to see him. The worker didn’t recommend it, but I insisted. He begrudgingly pulled the ferret out and was wary of handing him to me. 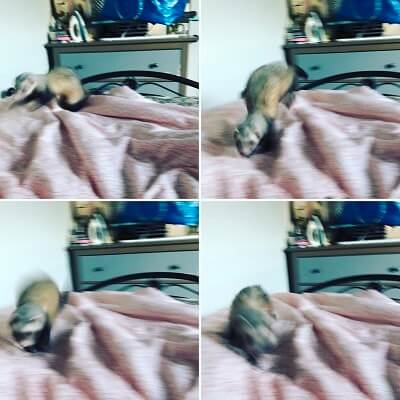 Of course, the ferret bit me. But, being used to a cat with a pension for scratching, it didn’t really bother me, and I pried his little mouth open and looked him in the face. I fell in love with. I went home that day, having spent all of my savings on the little guy, who I hadn’t yet named.

Over the next few days, I mulled over his name, trying to get him to warm up to me. He was definitely a biter. It was frustrating, especially because I was grieving – my rattie used to just come up to me and take a nap against my side, and the ferret wouldn’t even let me hold him too long before sinking his teeth in. I was careful not to flinch from him, though, instead opting to calmly and sternly say “No bite,” and pry him off of whatever appendage he latched on to.

It took me about two weeks to stop the worst of his biting, but I had to be careful not to let my feet dangle over the side of the bed when he was running around. It’s been about nine months, and he’s a completely different ferret than he used to be.

Shimmy is hyper, curious, and thieving. He doesn’t like cuddling, but he likes attention and will come running up to play games or to be picked up for a moment. He sometimes gets carried away when we play and will bite, but as soon as I say “No bite,” he lets go, licked wherever he was biting, and resorts to merely biting at the air/moving his head around with his jaws open. He’s got free-range of my apartment when I’m home – my apartment was rat-proof (no holes my ratties could escape into, nothing they could knock over or eat within reach, no cords for them to chew through) so I knew it was ferret-proof. That isn’t to say I haven’t had my scares, of course – I often panic when I see him thump off of a table, only to see him darting away at full speed completely unbothered. I’ve learned that unlike a rat, he is a little more curious about things and more prone to at least lick something he shouldn’t (mostly lotions). And, while I would not recommend anyone letting their ferrets unsupervised around cats, Shimmy does stay outside of his cage 100% of the time I’m home, including when I’m sleeping. My cats, you see, we’re very used to small animals not being chase-able, and even when they play with Shimmy, their antics are similar to how they would treat a kitten with unharmed chastising. 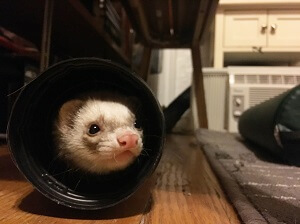 In March, Shimmy was made my emotional support animal. I talked to my therapist about it, and she agreed that he was helping with some of the mental issues I struggle with, helping to bring me joy and roll out of bed in the morning. It makes me so happy, each morning, to see him running around, popcorning/war dancing, trying to get me to play with him. I honestly don’t think anything else just fills me with that sort of silly happiness. It calms me just to pick him up when he’s fast asleep, and feel his little two-pound body warmly snuggled on my chest. My new project with Shimmy is getting him onto a raw diet. He’s likely almost two years old, but he’s been warming up to raw chicken but won’t eat more than one or two little pieces before losing interest.

A few weeks after I got him, I took Shimmy in for a check-up at the vet – unknowingly, the same vet that the pet store used to bring him to. I noticed the shirt of someone picking up a hamster and asked if she worked at the store down the street. She said she did, and I mentioned that I’d gotten Shimmy there. He was sitting in my lap, in his harness, calmly hanging out. She took one look at him and said, “Oh, I remember him.” She pulled up her sleeve. “I still have the scar he gave me.”

She was wary to pet him, but I was proud, at that moment, that someone who once thought he was a terror saw him now, as a loving little buddy who just needed a home.