My name is Neil, I’m 33 years old and live with my wife in Surrey, in the UK. I work in the software industry. When I was growing up, I never knew anyone that had a ferret, and very rarely saw them on the TV. I only found out about ferrets properly last year at a County Show in Surrey, when I visited the Ferret Rescue Surrey group. 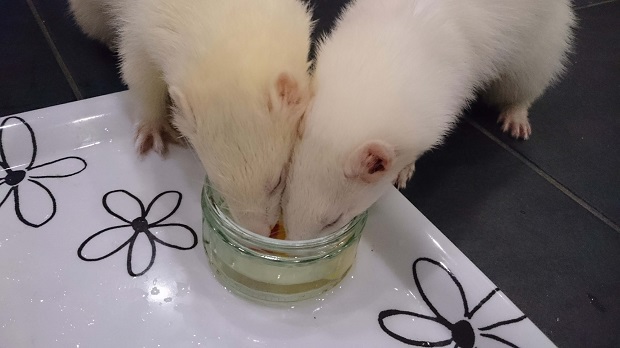 Unfortunately, we had to give up our cat, as we lived on a dangerous main road. Ferrets seemed like a good replacement for us. We got our ferrets in the summer of 2016. Ferret Rescue Surrey organized 3 groups of Ferrets for us to meet, so we visited them to interact with them and find out which were a good match for us. The pair that we settled on was a 4.5-year-old Silver Male called Ottis, and a 1.5-year-old Albino Female called Luna. Ottis had been found as a stray, rummaging in some tin cans for food, and so had cuts on his face. He’s boisterous and really really playful despite him being relatively old. He loves to dig and hide, and he has a reputation for being a bit stupid.

Luna had been adopted various times before but had been returned because she could be a bit bitey with some people. She’s generally very calm, and not particularly playful, but will play with Ottis when he goads her into it. She has a real love of anything rubber. If there is anything rubber at ferret height in our house, she will steal it and take it underneath the sofa to chew on. Her favorite toy is a Kong, especially if it’s had some malt paste squeezed into it. Since she’s been with us, we think we’ve got her biting under control. By getting to know her we discovered that she was only using biting as a last resort to getting our attention. Now we can pick up on her communications before she gets as far as biting, she’s much better. 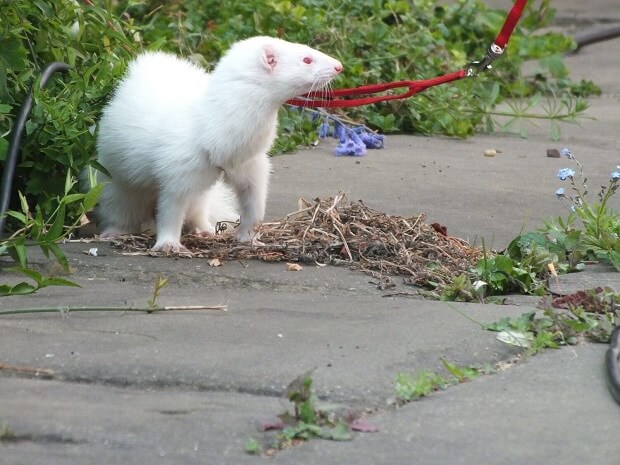 Because both my wife and I work, we only tend to interact with our fuzzies in the evening, which is fine by them, as they LOVE to sleep. We let them roam around the house in the evenings, they chase each other around, dooking and play-fighting constantly. I think they’re happy. We’ve recently started to teach them some tricks to help enrich them. Luna loves this, as she’s highly motivated by treats.

We feed them Dr. John Merlin dry food, with the occasional treats of meat offcuts, cod liver oil, egg. We also give them Baephar Vitamin/Malt paste on their bellies, which they love. It really helps when you need to trim their nails. For training, we use tiny pieces of dried duck or chicken. 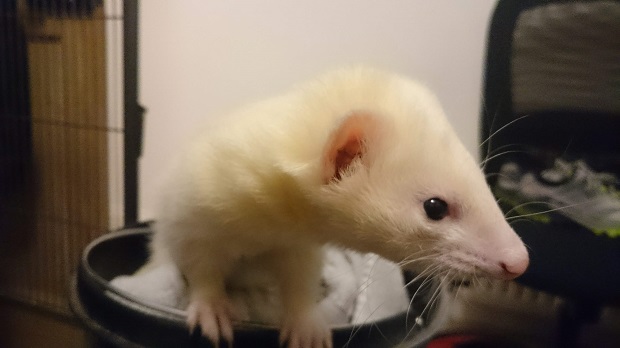 Ottis loves tunnels, so we have a vinyl ventilation tube which he loves to run through playing tag with Luna. Luna always starts of being chased, but always wins in the end, she’s feisty! Luna’s favorite toy is her Rubber Kong, she can sit for huge amounts of time under our sofa chewing it rhythmically. Ferrets are great pets, but they are harder work than a cat. You have to be able to commit time to them every day. Ferret personalities vary greatly, so make sure you choose your ferrets based on their personality rather than just by color, and you’ll be rewarded for it.

Ferret Rescue Surrey organizes a ferret ‘Olympics’ every year where there are races and obstacle courses. Because of Ottis’s love of tunnels, I was certain that he would be great at it. Unfortunately, when the race started, he ran in the opposite direction away from the tunnels, by the end of the race, he ended up further away from the finish line than he started. Luna did much better, but only by holding treats directly in front of her as an incentive.