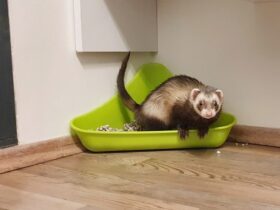 Complete Ferret Poop Guide: What Is Normal And What Isn’t?

Do you know what is the average life expectancy for ferrets?

How long do ferrets live as pets?

Today the topic is surrounded by ferret years. I will share with you information about the life expectancy of a ferret, how can you determine ferrets’ age, what can you do to make your ferret live longer and what should you avoid to keep them happy, healthy, and live for many years.

What Is An Average Life Expectancy Of Ferrets?

An average ferret lifespan is around 4-10 years. Yes, that is a very large lifespan because it depends on many factors. For example, due to the ferret farms that are common for the USA, not for Europe, ferrets in the USA have an age span of 4-6 years. Due to a better genetic diversity (but not perfect) and the fact that ferret farms aren’t popular there, ferrets from Europe can experience a slightly better lifespan of 5-10 years. Besides the ferret farm influence, there are other things that affect a ferret’s life like a good diet, a good veterinarian, etc. 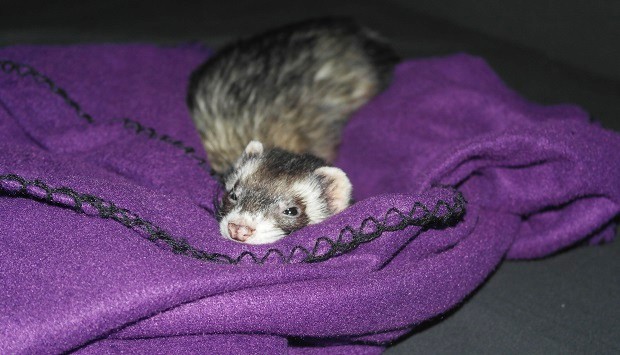 When A Ferret Becomes An “Old Ferret”?

Ferrets between 4-6 years old are considered “middle” to “late-middle” aged ferrets. Ferrets between 6 and 8 years old are considered elderly ferrets and every ferret above the 8-year-old range is considered a very old ferret since it is almost the peak of life expectancy for ferrets. You can also notice an energy drop in older ferrets, which can, and doesn’t have to be, a sign of an illness. That is why it is very important to go with your ferret for a check-up every year with an ultrasound checkup. When a ferret gets older, it is smart to check sugar levels in the blood every 6 or 3 months, depending on the age.

How To Determine Ferrets Years?

It is hard to determine how old is one ferret simply by looking at him. But, there is a way to know the age and that answer lies in their mouth. Veterinarians and other experienced ferret people look at the state of the ferret’s teeth to determine the age of a ferret. 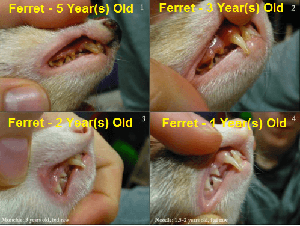 Ferrets Under 1 Year Of Age

The teeth in those ferrets aren’t that perfect anymore, but they are still in pretty good shape. There should be yellowing on the teeth, but only at the tip. Also, the teeth may appear slightly translucent and that is a sign of teeth enamel weakening. There is a bigger chance that sharp teeth are damaged in these ferrets than in younger ones. Again, determine the reason and treat if necessary.

Ferrets Between 3 And 4 Years Of Age

Ferrets in that age span have yellowing on their entire teeth. Also, some teeth can be damaged due to their state and the age of the ferret, so it is not uncommon for a ferret to have a broken tooth. You have to treat the teeth if necessary and to know that, visit the vet.

Ferrets Above 4 Years Of Age

Middle-aged ferrets can have pretty bad teeth, especially if ferrets eat low-quality kibble. Ferrets that eat raw meat, bones, and organs have better teeth, but they are still yellow, damaged on the tip, etc. Teeth in this age span can be in different colors, from yellow to much darker yellow, even brown. There can even happen that a ferret misses a tooth or two.

How Can You Improve Pet Ferret’s Lifespan?

You can make sure that your ferret stays healthy by providing him with good living conditions. Make sure you know what ferret needs every day and how can you choose the best option for a happy and long life expectancy of ferrets in your home.

One of the things you can do to improve the life expectancy of a ferret is to pick the right diet. As I have already mentioned, a ferret’s diet should consist of raw meat, bones, and organs. But, you can’t simply give him beef and call it a day. You have to balance every meal, meaning it has to have a certain amount of meat, organs, and bones. Also, you have to give your ferret different meat types, you can’t feed him with chicken for the rest of his life. 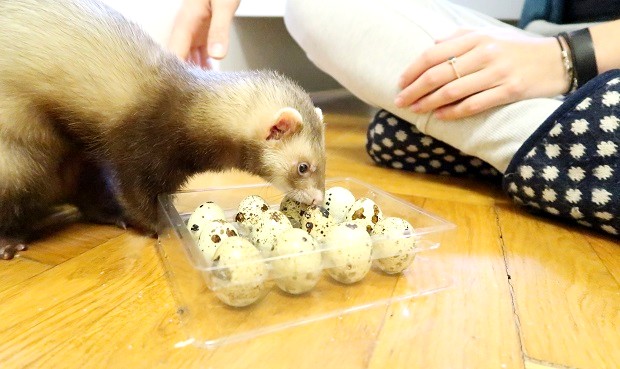 Another option is to pick a good ferret kibble. A good ferret kibble is grain-free cat kibble. That kibble should have a high percentage of animal protein and fat. It also should be low in vegetables and fruit to avoid fiber and sugar. There should be at least 3 different animal proteins, meaning coming from different animals. If you want to know what are the most important things to consider when choosing good kibble to prolong a life expectancy for ferrets, read my post about the best ferret kibble.

Neutering and spaying ferrets keep their hormones in check which prevents different illnesses. But, it is not enough to do it, it is important when to do it also. The reason why most ferrets in the USA have a lower ferret lifespan is because of ferret farms. They neuter/spay their ferrets too soon when they are only a couple of weeks old. 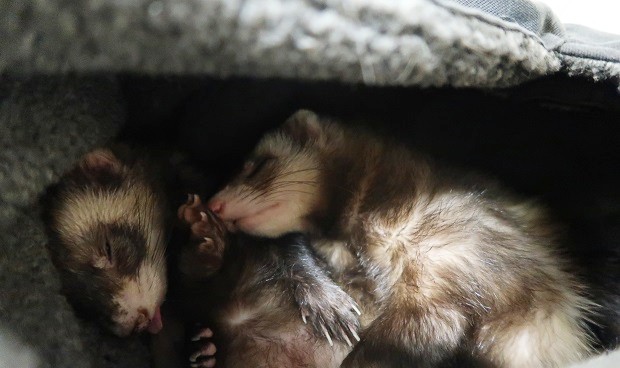 Neutering/spaying should happen around the 9th month or later, not a couple of weeks. If you do it to your ferret at the wrong age, he can suffer from adrenal disease and some cancers. Although most serious illnesses appear when a ferret is already middle-aged, too soon neutered ferrets can experience them earlier, even at one or two years.

It is not that easy to find a knowledgeable veterinarian for ferrets. Since you will go to the vet at least once a year for regular check-ups and vaccinations, it is a good idea to find a vet how knows how to handle a ferret, what medicines are safe for them, and what therapy works best. 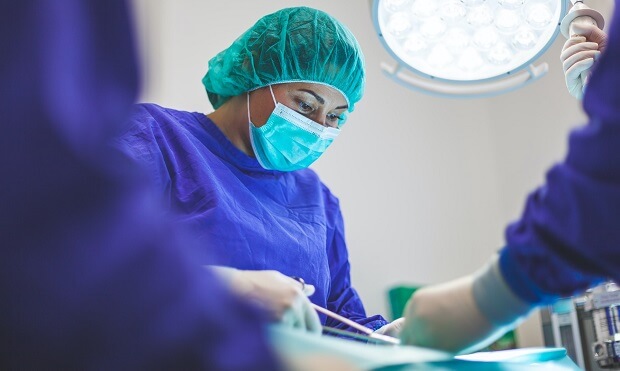 A good veterinarian can recognize subtle symptoms for some serious illness and you can both react in time to prevent it from threatening your ferret. Health and care are both very important in ferret’s life expectancy.

Where To Buy A Ferret?

As you have already noticed, I have mentioned ferret farms a couple of times through this article. I did that because I want to show you how important it is to buy a ferret from a good source. Buying a ferret from a bad source only encourages that and we want to stop it, not encourage it.

The biggest problem in both backyard ferret breeders and ferret farms is the fact that they don’t combine different genetic materials in ferrets. They use connected ferrets with similar genetics and that results in weak ferrets with fragile health. Keep in mind that ferrets from pet stores are actually ferrets from ferret farms. 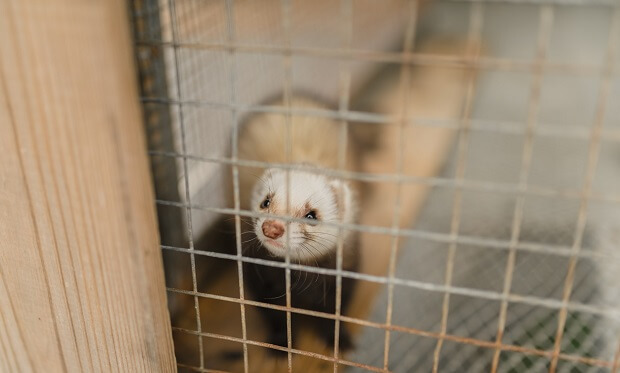 Now, a good thing about backyard breeders, probably the only good thing, is the fact that they don’t neuter/spay the ferret. That way you can do it when the time comes and not too early like ferret farms. That doesn’t justify buying from them, both should be avoided at all costs.

Good ferret breeders care about the genetic and about the general health of every ferret in their ownership. Yes, the average cost of ferrets from breeders is higher, but you will get a healthier pet with a longer ferret lifespan. 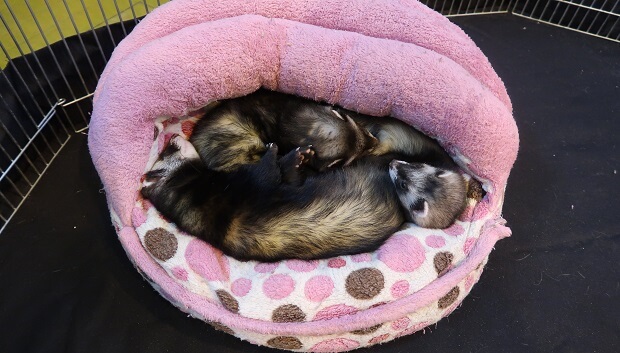 You will also get a ferret that knows how to act, doesn’t bite, and is, in general, a good ferret. This isn’t some scheme, that is why most in Europe there is longer ferret lifespan data. Simply because there are no ferret farms in Europe.

A life expectancy of a ferret greatly depends on the general ferret’s health, but you have a great influence on it too. Make sure you know what is good for your ferret and what isn’t. Avoid everything that can harm your ferret and keep him safe at all times. That is a way to have your ferret for many years to come. What was your oldest ferret? Where did you get him? Share your story with us in the comments below the post!