Why are ferrets illegal in California?

What can you do to change ferrets’ illegal status?

I will dedicate this post to the ongoing questions are ferrets allowed in California, why they aren’t and what can you do regarding that issue. But, before we start talking about the solutions to “why are ferrets illegal in California”, let’s focus on that question and its history. We have to start from the beginning. 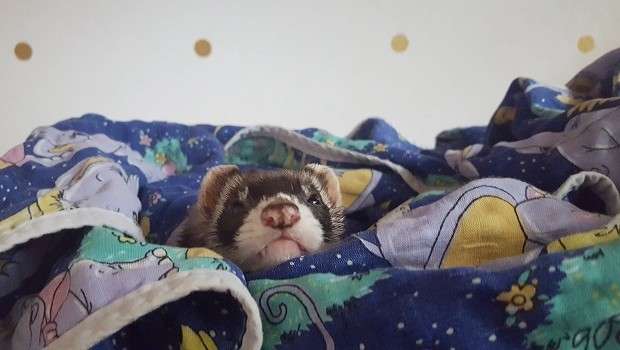 Since When Are Ferrets Illegal In California?

One of the first year that talks about the ferret ban is 1933. So, it happened almost one hundred years ago when the Fish and Game Commission and Department of Food and Agriculture took “Rules and Regulations Governing the Importation of Wild Birds and Animals” as the basis to prohibit ferret and fitch importation.

In 1976, the Commission allowed owning ferrets only with the permits and for particular situations like for exhibition in ZOOs, for research made by the scientific institution, and for display in motion pictures and television. Only neutered male ferrets were part of that decision.

In 1980, the request for permits skyrocketed because many people wanted to own ferrets as pets. Later in the year, there was a permit for spayed female ferrets, but you couldn’t import ferrets for sale.

In 1982, Department found out about a huge number of illegal ferret breeders all over California so they revoked all permits. The only way to gain a permit was if a person moves to California with a ferret already in their household. This restriction was active until 1985.

At the end of 1985, the Department of Food and Agriculture allowed the ownership of two spayed female ferrets.

The 1986 year is pretty important because it is a milestone for pro-ferret groups. That is the year when a big fight for ferret legalization started. On the other hand, the Department didn’t cave and prohibited the ownership of neutered male ferrets. Neutered male ferrets were considered illegal pets which meant you can’t buy or sell ferrets, but you get to keep the one you already have in your household.

Why Are Ferrets Illegal In California?

There are three main reasons for that. None of them make sense and the fact that those reasons haven’t changed in decades is pretty devastating. That means their legalization issue is active thanks to old and outdated laws. Some other states have the same reasons for the same issue – ferret legalization. If you want to see what are states ban ferrets, read my post about ferret legality. 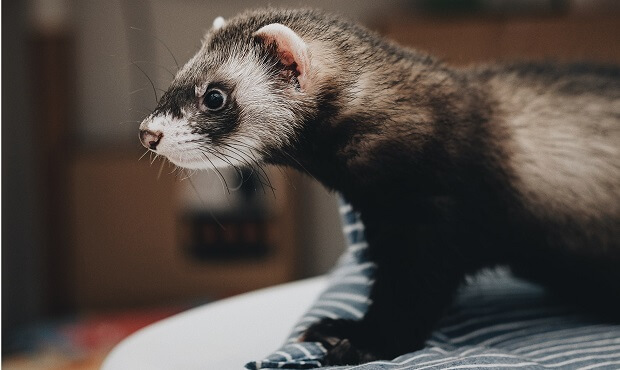 Those three reasons are:

Now that we know those reasons, let’s look at each one in-depth.

Ferrets Are Aggressive, Especially Towards Infants And Small Children

Ferrets are animals, we can all agree to that. But, so are cats, dogs, rabbits, etc. Each and every animal will bite if provoked. Also, it is the owner’s responsibility to train any animal no to bite, not to attack, but to behave in a certain manner.  Yes, ferrets can inflict an injury on an adult and infant too. It is not recommended to leave your ferret alone with your children.

If we take a look at actual biting reports, we would see that there aren’t many ferret biting reports as there are reports of bites made by dogs. Also, considering the size of any dog breed and the size of any ferret, you can assume that dog bites are much more dangerous. That means that dog bites can result in casualties more often than ones made by ferrets. Don’t get me wrong, ferret bites are pretty hard but they can’t make the same damage as dogs. 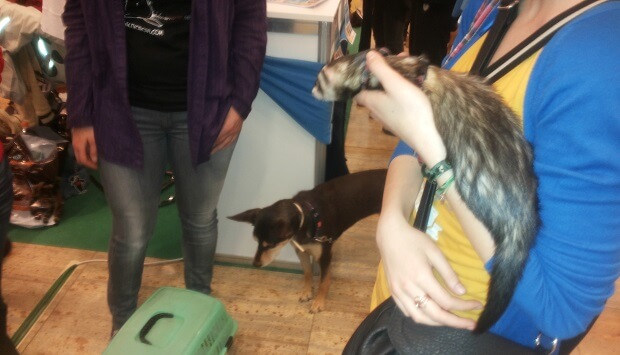 Is That Ferret’s Fault?

Yes, there were reports of ferrets biting infants or small animals, I won’t lie. But, the interesting part is that a majority of those reports had “starving”, “neglected”, “in bad shape” in the ferret’s description. That leads to another conclusion connected to the ferret owner’s neglect. If a ferret has a good owner, who treats him well, gives him food, care and attention, ferrets won’t bite. Ferret’s aggression has roots in bad living conditions, it is not because a ferret is aggressive by nature. A biting ferret can be scared, abused, hungry, starving, he won’t be bored or aggressive for no reason.

There Is No Vaccine Against Rabies In Ferrets

That might have been true in 1933, but today, there are good rabies vaccines you can use on ferrets. They will be effective and ferrets will be protected from rabies. The issue rises in something else. A ferret mustn’t receive a rabies vaccination if the ferret is younger than 12 weeks. Most kits go to a new owner younger than that so it is the owner’s responsibility to vaccinate the ferret against rabies. The same story is with kittens and puppies and people do that for ages. Why is that a problem with kits? We will never know.

When it comes to rabies in ferrets, it is interesting to know that it is very rare. There are less than 25 documented cases in a span of 40 years (1958-1996). Now, there are a few reasons for that, but the most common one is the fact that ferrets are indoor animals. Most ferret owners keep their pets inside, away from the possibility of getting bitten by a wild animal with rabies. It is more likely your dog or cat will catch rabies than your ferret. 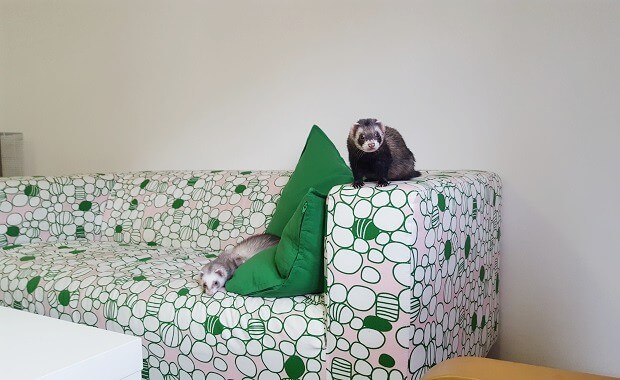 What When Ferret Escapes?

A situation when your ferret can catch rabies is when he escapes. The problem with wandering ferrets is that they don’t have a sense of home. That means once they escape, most of them don’t know how to get back. The first 3 days are crucial and after that period, the chance of their return rapidly falls. That means, unfortunately, that a big part of ferrets doesn’t return home. In that case, rabies vaccination is the least of your problems, the only thing you would wish for is for your ferret to come back home. 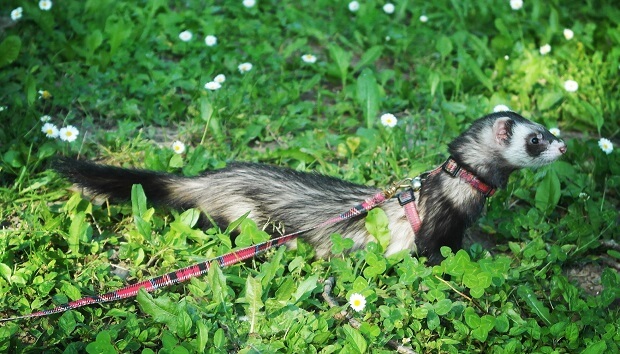 This issue is connected to the issue above in one part. That means it can happen – in theory – if your ferret escapes. This problem claims that if a ferret escapes, a ferret will develop feral colonies and start attacking small animals in that area which can lead to their extinction and disturb the natural balance. 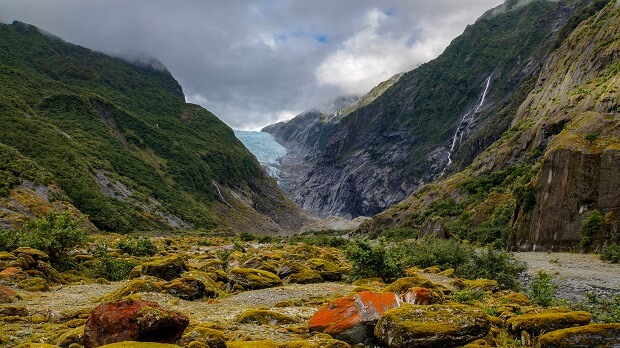 If we compare a pet ferret in California with a working ferret in New Zealand, we can see that there are many differences, from their behavior – trained to hunt rabbits, to New Zealand’s nature to the fact that a neutered/spayed ferret cant’ breed. Besides those facts, we can also consider the fact that any pet ferret can’t survive too long in the wild alone.

Ferret – A Hunter or Prey?

Yes, ferrets will probably hunt a few small animals, but we can’t forget the fact that a ferret is small. Ferrets are good hunters, but they are an even better catch. That means a ferret is also considered prey to many other wilder and bigger animals, from wolves to dogs, even feral cats. If we take those things into consideration, we can see that developing a feral colony in California is very small. Not, only in California, having a feral colony of ferrets is not something that can happen easily. 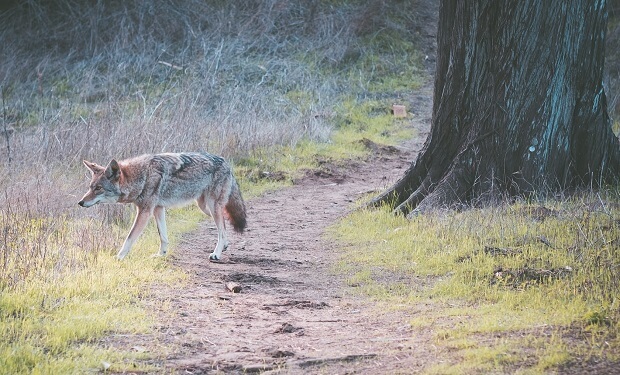 “Ferrets are wild animals” Is a claim people use to answer why are ferrets illegal in California. This claim makes me mad because every person who is slightly interested in the topic can find information that ferrets are domesticated around 2,500 years ago. That is two and a half millennia. If ferrets are still considered wild animals after more than two millennia, then we don’t know what we are doing domesticating them. They simply can’t be domesticated and we should live them be in nature where they belong. 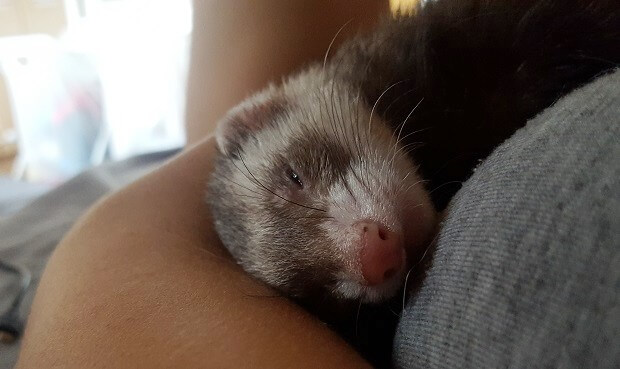 That claim is absurd and there is so much evidence that proves otherwise, from the fact that can’t survive on their own to the fact that we can actually train ferrets, pet them and live with them. Each and every reason to claim that ferrets are illegal to own in California is wrong. There are numerous surveys, researches, claims, and facts that can prove otherwise. That leads to one conclusion. The question of why are ferrets illegal in California doesn’t have a valid answer.

What Can We Do To Help?

We, ferret owners, can do a lot when it comes to ferret legalization. Here are some things you can do no matter where you are. The important thing is that you have to remember to do that for ferrets. With ferret legalization, you will improve their life quality, more veterinarians will take them in and help them stay happy and healthy.

One of the best things we can do is to provide and use only good information about ferrets. That way our ferrets will be well-mannered pets with full tummies and happy looks on their faces. Sharing good ferret information will help you provide a good life to your pet. You will learn that releasing a ferret in the wild is not an option and because you are practically sentencing him to death.

You don’t have to be in California to help with the are ferrets allowed in California question. Find the online petition that talks about it and sign it. That way you will show support to numerous ferret owners in California.

Legalizing ferrets in California is a long and complicated process. I respect and admire ferret owners there who are fighting for that issue. They made great progress in the last couple of years and I really hope they will achieve their goal soon. The reasons for the ferret ban aren’t valid and that gives me hope that the goal is near.