Hi, well my name is Hannah, I’m from the not so sunny North Wales UK. I’m 21 years old and I’m a dancer, training to be a dance teacher and sports masseuse. 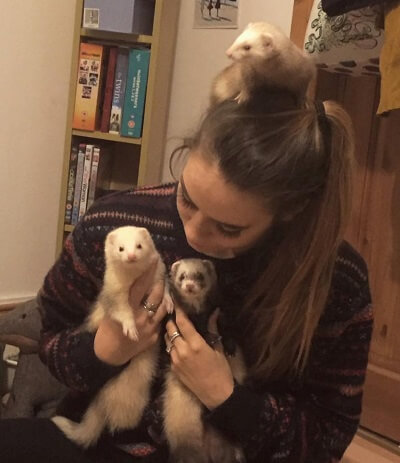 I first found out about ferrets when I saw them in the film The Golden Compass and just like Anja I decided I had to have them! So I did my research, I visited a local breeder in 2014 and took home my little Ruby. She’s 2 years old now and I love her to bits! Her favorite toy is one of those dangly cat toys in the shape of a mouse that squeaks and crinkles and her favorite treat is the raw egg!

2 years later august 2016 I felt Ruby needed company when I was at work or training, it was also another perfect excuse to have more ferrets! So I went and brought home Ruby two new playmates! I kept them separate from Ruby for a couple of days but she instantly knew something was different and would dook all day and all night, so I decided to introduce Ruby to Lunar and Tink! For Ruby it was like mother instincts had kicked in, she was grooming them and licking them constantly she couldn’t leave them alone!! I was worried that because she’d spent so long without ferret companionship she wouldn’t except the girls and would be completely distraught, but I had nothing to worry about! Because 8 months later, all three have an incredible bond with each other! They are my pride and joy, and very protective of them!

Tink I can tell would have made a great worker because of the way she thrashes around her toys!! She’s a silver mitt and has the personality of a lion! This doesn’t really suit her name because she was originally named after the fairy in my sister’s favorite Disney film Peter Pan! But the name stuck so Tink it is!

Lunar is the total opposite. I call her lazy Lunar because all she likes to do is eat and sleep! She’s a dark polecat and definitely my cuddle buddy! Her personality definitely suits the name lunar (like lunar eclipse).

Ruby is sandy and although she is the smallest, is the dominant one of the three and she makes a great leader, she’s affectionate, wise, funny, and intelligent. Which to a non-ferret parent is a lot to say about a ferret, but that’s what comes to mind when I think about her personality. 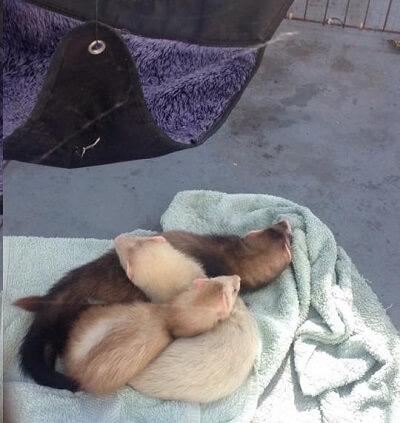 The best adventures are when you find something out about your ferret you never knew before!!! When Tink plays she wags her tail a lot! It’s hilarious to watch and I only noticed a couple of months ago! Ruby takes note of where I put her favorite things!! Her dangle toy, the kibble, the turkey mince in the fridge, and the salmon oil hidden in my drawer, which whenever I leave the room, I come back to find her digging in the drawer but makes a run for it when I catch her in the act. Lunar is the biggest hoarder I’ve ever known, she’ll steal everything and anything, I looked under my bed and in the corner was a stash of pens, cuddly toys, treats, slippers, shoes, socks, empty bottles, and wrappers from my bin, underwear, my makeup brushes, she even managed to drag my hairdryer under there! Watching them do these things really make me smile, they are so carefree and make all those bad days at work worth it!

To new ferret owners, I wish you luck and I hope they bring you as much happiness as they do for me! Ferrets are truly amazing animals that have been seriously underestimated. Anja is doing a terrific job in bringing together a worldwide ferret parent community! The more ferret parents – the better!

And to those who are thinking about getting ferrets, it is a big commitment! They need all your time and attention but believe me, it’s so rewarding. And with Anja’s help and guidance, you’ll be perfectly fine!

So that’s me done!